There are times in history when the character of leadership takes on a vulgar quality. The vulgarization of leadership is not new. Plato, for example, rightly indicated that leaders armed with only with an untrained mind that naively accepts perception as real, whether that is the confused and contradictory messages of the senses or the equally inconsistent popular notions of morality are not ready for leadership. Yet, there is a sense in which the political and popular rhetoric evident in many discussions today fail to rise above this level of reasoning – Plato’s lowest level of cognition.[i]

Abraham Lincoln’s behavior in the face of the greatest threat to the union we have faced until now stands in stark contrast to the virulent monologs that characterize much of today’s political and social discussion. Lincoln made it clear that vengeance or spite could not function as the foundation of leadership. Lincoln wrote regarding Louisiana’s readmission to the union, “I shall do nothing in malice. What I deal with is too vast for malicious dealing.”[ii] Listening to today’s politicians on the threat of terrorism it appears we may have lost that lesson.

By the vulgarization of leadership, I mean that quality that is incapable of ascending above the ostentatious, showy, gaudy, and distasteful behaviors of the lowest common denominators of society. Such men or women become so enamored by the ability to exercise raw power in the manipulation of others that they mistake inciting the frustrations and fears of people as a vision for the future. Inciting rather than leading a trap described in part by James MacGregor Burns who warned: “Divorced from ethics, leadership is reduced to management and politics to mere technique.” Incitement does not have the will to investigate the ethical implications of its claims and furies. Incitement languishes in fuzzy half truths and an accusatory tone that fails to either credit other’s good ideas or work toward a mutually beneficial public policy.

I really deplore the tone of his campaign, the inflammatory rhetoric that he is using to divide people and his going after groups of people with hateful, incendiary rhetoric,” she said after a campaign event in Fairfield Tuesday. “Nothing really surprises me anymore. I don’t know that he has any boundaries at all. His bigotry, his bluster, his bullying have become his campaign. And he has to keep sort of upping the stakes and going even further.[iii]

Yet, Clinton is not above using the inflammatory rhetoric of her own to incite popular support. This is perhaps most notably evidenced in her assertion that ISIS is “going to people showing videos of Donald Trump insulting Islam and Muslims in order to recruit more radical jihadists.”[iv]

Rubio and Cruz are also guilty of half-truths and falsifications all used in an attempt to strengthen their position in the eyes of voters. A quick check of www.politifact.com provides numerous illustrations.

So, what exactly is the problem? I venture that there is no leader who hasn’t stretched the truth in their presentation of themselves or their data. If the exercise of falsification is so common what makes it warrant my derisive title, the vulgarization of leadership?  In short the question is a postulate of my position. If vulgarization is behavior that meets the standard of the lowest common denominator then its commonality is the verification of my title and its consequences make my point. The vulgarization of leadership does not summon people to a higher vision that works for change but to a coarse vision that seeks to ensconce prejudice, fear, and isolationism as the core values of our society.

Like other critical periods in human experience, we need leaders today who are capable of instilling a commitment to change that mobilizes and focuses the energy of a diverse populace, who call people to responsibility in the formation of a different future. We need leaders capable of explaining their moral foundation clearly and who are then ready to rigorously explore how to work with those who hold different perspectives.

At its birth, the United States attempted to make assumed moral assumptions explicit,

We hold these truths to be self-evident, that all men are created equal, that they are endowed by their Creator with certain unalienable Rights, that among these are Life, Liberty and the pursuit of Happiness.That to secure these rights, Governments are instituted among Men, deriving their just powers from the consent of the governed, that whenever any Form of Government becomes destructive of these ends, it is the Right of the People to alter or to abolish it, and to institute new Government, laying its foundation on such principles and organizing its powers in such form, as to them shall seem most likely to affect their Safety and Happiness[v].

The Declaration of Independence assumed: (1) a transcendent moral foundation versus a utilitarian one (i.e., endowed by their Creator); (2) unalienable rights, which we have attempted to define within the kaleidoscope of culture and social difference ever since; and (3) the responsibility of people to design and sustain a form of governance that worked in harmony with this moral foundation and unalienable rights of every person. The United States has never gotten this perfect, the exclusion of women or the exclusion of slaves, or the exclusion of those who did not own property under its colonial beginning illustrate this. The biases against the Irish or the internment of Americans of Japanese decent are well-documented failures that illustrate our ongoing struggle.  But struggling to align behavior to the ideal is not a failure unless we learn nothing in the process. A failure to learn is a failure to exercise metanoia i.e., a shift of mind. As Senge asserts, “To grasp the meaning of ‘metanoia’ is to grasp the deeper meaning of ‘learning,’ for learning also involves a fundamental shift or movement of the mind.”[vi]

So what is the escape from the pattern of vulgarized leadership I see in today’s political and social dialogue? First, it is a movement toward metanoia, some of our perspectives are wrong; we are stuck in the cave of Plato’s allegory blindfolded by biases and prejudices we can’t see to admit. Without this first step of change, we will only run deeper into the cave. Leaders must be open about admitting their lack of knowledge or miscalculations or faulty information. Fact checks should not be an afterthought but part of the process of learning especially for politicians.

Second, it is a movement of engagement that addresses difficult and complex issues of the day with the courage to admit our core convictions and moral foundations. Zero progress is possible without this kind of vulnerability and admission of our differences. No one has a corner on truth; even those who may claim perception of the truth have to admit they only “see through a glass darkly” rather than with clarity and comprehension.[vii] Every leader must start with a clear description of their core commitments and follow that up with a clear understanding of the core commitments of their opponents. This calls for true debates that remained disciplined enough to get at the positions without degenerating to school yard name calling and insults.

Third, it is an effort to create a culture of critique rather than cynicism, of investigation rather than accusation, of the will to act in the common good rather than pacing one’s step along the path of the latest poll. Encourage dialogue. Let people disagree but back their disagreement with reasons based on their own commitments. Then engage the conversation with awareness and vulnerability.

What kind of conversation do you contribute to the issues?  Are you caught up in the vulgarization of leadership or will you stand boldly out from the cacophony of noise to raise the questions and clarify the values that we need to wrestle with together? Let’s have the conversations that we need to engage. 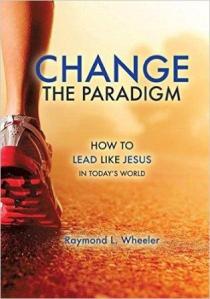 Have you ever had something you wanted to say that you knew had the potential of changing the game? Have you been so convinced of its significance that you were willing to put it to the test of review, the discipline of systematic research and reflection, and the vulnerability of distribution?  Then you understand the passion of writing a book with the hope that it will amplify your message and your communication capacity. I have a message for market place and non-profit leaders who want to integrate their faith and leadership best practices.

There are some very strong books on leading like Jesus. Why did I write another book? I saw something missing. The way Jesus led not only transforms the way a leader acts; it also transforms the way an organization behaves for the better. Changing the way we think about leaders and their organizations is the intent of Change the Paradigm.

Change the Paradigm: How to Lead Like Jesus in Today’s World is a clarion call to apply the concept of servant leadership to every organizational context. It is a handbook that demonstrates how the concept of Servant Leadership goes to work in the leader and in the organization. It investigates Servant Leadership through five perspectives: (1) the lens of Jesus’ call to serve; (2) the Missional impetus of the church and its foundation in a future hope made present in experience; (3) the latest insights from research into effective leadership; (4) the influence of an organization’s development on leadership practices and (5) leadership development. Servant Leadership is fundamentally a transforming perspective and composite of personal motivations that impact how the act of leading is expressed. It alters the way leaders view and value followers and stakeholders. Servant Leadership engages a personal relationship with God that changes a person’s definition of: self, ambition, values, situation, and the development of other leaders.

Change the Paradigm is available now at Amazon and Barnes & Noble as a paper back or an e-book. We are working on agreements to get it into book stores everywhere in 2016. Get a jump on the crowd and order it today. It will show you how to think differently about the act of leadership.